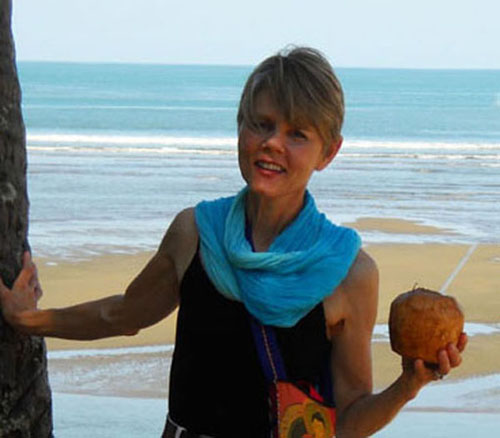 Kathleen Joffrion is a designer, illustrator, and art director whose career has spanned four decades.
Born on Louisiana’s Bayou LaFourche, Ms. Joffrion spent 40 years living and working in New Orleans.
She received a BFA from Louisiana State University, and at age 22, began her professional career
as a fashion illustrator. During the next 25 years she worked on staff as an editorial illustrator and designer
for a number of New Orleans publications including The Figaro, Gambit, Wavelength Magazine, and The Times-Picayune.
Beginning in 1990, at New Orleans Publishing Group, Ms. Joffrion became the art director and senior designer
for New Orleans Magazine and Louisiana Life for eight years. From 1998 to 2011 she taught as associate professor
of Visual Communications at ­Delgado Community ­College in New Orleans.
Upon leaving New Orleans in 2011, she returned to Cajun country, to the Gulf Coast town of Golden Meadow.
Eight years and many paintings later, Ms, Joffrion moved again, this time to the cooler climes of the North.
She now works as a freelance designer, painter, and book artist at her home studio in the countryside near Harrisburg, Pennsylvania.